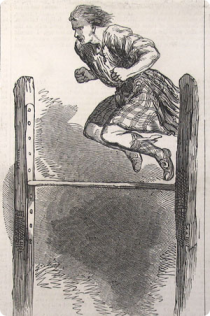 County Carlow has a rich and varied sporting history. There are reports of handball, hurling, football and horse racing taking place in the county in the eighteenth century.

Horse racing took place annually at Ballybar near Carlow town in the 1760's. There was racing at Ballon at a later date. Fox hunting was popular, and during the hunting season packs would travel the picturesque County of Carlow hunting the energetic and cunning fox.

Throughout the eighteenth and nineteenth centuries athletics tournaments were held in the county. In his book '1798 in Carlow' William Farrell describes "many athletic exercises so well known to Irishmen as hurling, football, cudgelling, tennis or handball, leaping, wrestling, vaulting, throwing the sledge or bar or grinding-stone", taking place in the county.

Farrell praises highly the quality of handballers and states that Carlow has "one of the best ball-courts in Ireland". Gaelic games are still extremely popular in Carlow. The Gaelic Athletic Association (GAA) was founded in Carlow in 1888 to promote gaelic games.

Other fieldsports played with great enthusiasm in the county were cricket, polo and rugby. Colonel Horace Rochfort of Clogrennan was the founder of Carlow Cricket Club, and founder and first secretary of the All-Ireland Polo Club at Phoenix Park in Dublin having founded the Carlow Polo Club in 1873. He was the founder president of the County Carlow Rugby Football Club in 1873. Teams played at Tinypark House and various other venues in Carlow.

The River Barrow provided an excellent venue for a Rowing Club in the county. However races and regattas had taken place in private boat-houses prior to establishment of the rowing club in circa 1860. The Carlow Rowing Club is still competing at all levels.

Carlow Golf Club [Leinster Golf Club] wasn't formed until 1899. The original grounds were at Gotham midway between Carlow and Maganey. The club moved to Oak Park in 1922. Golf has grown to be one of the most popular sports and pastimes in the county. The Deerpark course is set in a mature wooded area with pleasant countyside near Carlow town. Other golf clubs in the county include Borris, Killerig and Mount Wolseley, near Tullow.

The Community Games were established in County Carlow in 1973. P.L. Curran was the first Chairman and Sr. Carmel Terry the first Secretary. The movements's main aim is participation regardless of results. Many young Carlow people from the community games have achieved sporting honours in adult life. Among them are T.J. Kearns of Rathvilly in 110m hurdles, the Amond sisters in sprints, Paul McNally in cycling, Kenneth Kane in handball, Patricia and Carina Breen in draughts and Roisin Dermody in competitions for the visually challenged. The first County final was held in St. Patrick's College, Carlow in 1973. In that year, Mary Amond won gold at the National finals in Mosney.