Palladianism is a philosophy of design based on the work of Andreas Palladio, an Italian architect of the 16th century who tried to recreate the style and proportions of the buildings of ancient Rome. Palladio  was heavily influenced by the writings of the Roman Architect, Vitruvius. He made several mistaken assumptions about Roman domestic architecture based on partial remnants of classical temples; nonetheless his ideas were accepted and adopted widely. Palladianism at its most basic can be described as the use of classical design, and understated decoration.

Palladian architecture first appeared in Ireland in the early 1700's, and its philosophy was widely imitated throughout Europe, and particularly in 18th century England. Unfortunately, this design and others like it ignored the fact that Palladio was designing for warmer climes of his native Italy, and not for the grey skies of Northern Europe, Britain, and Ireland.

The most prominent Irish architect to work in the Palladian style was Sir Edward Lovett Pearce whose most famous creation is the old Parliament House (now the Bank of Ireland) in Dublin's College Green. Designed in 1728, and famous for its piazza surrounded on three sides by Ionic colonnades, it is the earliest large scale Palladian public building in the country. 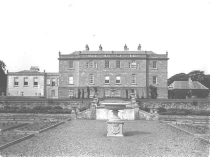 Richard Castle, a German architect, was responsible for the design of Leinster House (1745): designed as a town-house for the Dukes of Leinster, it is now the seat of the Dáil. This remains the most recognisable example of Palladian architecture in Ireland today.

County Kilkenny had some fine examples of Palladian architecture: Bessborough House, Piltown, which is now Kildalton Agricultural College run by Teagasc; Woodstock House, Inistioge was destroyed by fire in 1922 and only a shell remains; and Castle Morres, Aghaviller of which nothing remains. All of these houses were designed by Francis Bindon who had studied architecture in the office of the Surveyor-General, Sir Edward Lovett Pearce.