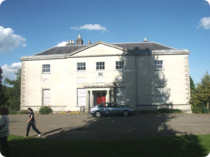 In Use As: Country House

Detached five-bay two-storey over basement former country house, built 1779 in Neo-Classical style and now in use as a heritage centre. The house was built by Samuel Hayes; designs may have been by James Wyatt. The building is finished in render with block and start quoins. The central three-bay breakfront is surmounted by a plain pediment. The timber panelled double front door is within a flat-headed opening; a portico is over the door and is supported on Tuscan order columns. Window openings are flat-headed with six over six and three over three timber sash frames. The hipped roof is finished with natural slate and cast-iron rainwater goods. Chimneystacks are rendered with plain caps and clay pots. Internally the house has been faithfully restored and is in very original condition. It has retained much memorabilia belonging to a former owner, Charles Stewart Parnell. The house is set within a large well wooded demesne.

A well preserved country house of the later 18th-century, which as the former home of Charles Stewart Parnell, possesses historical as well as architectural importance.