There is a legend associated with the origin of St. Brigid's crosses. Brigid was called to the bedside of a dying pagan chieftain. She sat by him to keep watch over him in his final hours.

While sitting by the dying man, Brigid picked up some rushes from the floor and began to weave them into a cross. The sick man asked her what she was making and Brigid began to explain the story of Jesus to him. Before he died, the chieftain had become a Christian. 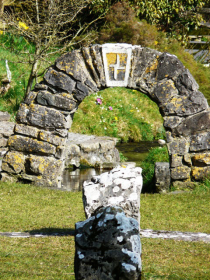 A St. Brigid's cross is usually made from rushes or, less often, straw. It is traditionally believed that the cross protects the home from fire. St. Brigid's crosses are often made on 1 February and sprinkled with holy water.

In some traditions, the cross from the previous year is taken down and burnt, and then replaced by the new one. St. Brigid's crosses were often kept under the rafters of the roof.

How to Make a Saint Brigid's Cross