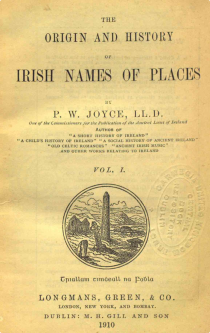 Despite writing his considerable first volume, P.W. Joyce had only used half his material and the natural progression was a second volume.

The author’s aim in writing the first two volumes of this book was to explain the phonetic laws under which Irish place names were anglicised. Volume three was a natural sequel and P.W. Joyce has endeavoured to include names which you would not find in the previous two volumes.

The third volume of ‘The Origins and History of Irish Names of Places’ has a vocabulary of the root words from which Irish place names are most generally formed. The book also contains a selection of better known names in the country, to help explain the root words.

The sources from which the Irish names and meanings have been obtained are separated into three different classes:

Educated at a hedge school - P.W. Joyce ( 1827-1914) – was to become a key cultural figure in Ireland. He was born in Ballyorgan, County Limerick and was a native Irish speaker. Joyce started work in 1845 with the Board of National Education in Clonmel. He was later the President of the Royal Society of Antiquaries of Ireland

He produced many works on the history of Ireland including; On the Old Celtic Romances, Irish Grammar, and the English Language in Ireland.

Previous - Grierson: A Natural History of Ireland
Next - Kennedy: The Banks of the Boro: A Chronicle Of The County Of Wexford