Twiss: A Tour in Ireland 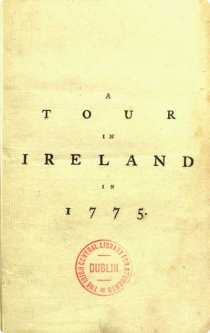 Richard Twiss (1747-1821), born in Rotterdam, was the son of a wealthy English merchant. Twiss had Irish connections, being descended from another Richard Twiss, agent to Herbert, Earl of Powis, at Castleisland, County Kerry.

In 1775, he completed a tour of most of the counties of Ireland. The resulting account was one of the most controversial books of its period. Based on his experiences of a five-month stay in the country, together with contemporary illustrations of the sites and views visited by Twiss during his tour, the Irish public found it a thoroughly unflattering representation of Ireland and its inhabitants.

Twiss’s book has been widely quoted as a contemporary source for Irish life, though almost in all cases in a negative sense. It was a best seller in its day due to the fact that it was seen to deride every aspect of Ireland - its cultural achievements, the morals and manners of the inhabitants, the condition of the roads and inaccuracy of the maps. The printers and booksellers in Dublin at the time fueled this anger towards Twiss, the villain, ensuring sales soared. A chamber pot was even sold by printers which had Twiss’s likeness at the bottom, taking advantage of the new consumer culture of eighteenth-century Ireland, along with popular patriotism.

A veritable outpouring of articles, essays, poems and caricatures resulted but Twiss could see the gain in courting this controversy too. There was unprecedented knowledge of comments made, even by the most unlearned.

Previous - Trotter: Walks through Ireland
Next - Industry and Trade