Taylor & Skinner: Maps of the Roads of Ireland Surveyed 1777 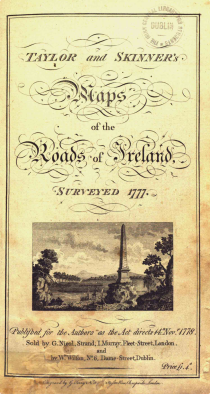 George Taylor and Andrew Skinner were surveyors who had already surveyed the roads of Scotland and the postroad from London to Bath.  In 1776, they sought funding from Ireland’s noblemen and gentlemen in order to map the roads of Ireland.  They succeeded in raising over Ł2,000 which paid for their survey costs, two additional surveyors and sixteen assistants, the engraving and the printing costs.  They began their survey in February 1777 and completed it by the end of the year.

We have evidence from other writers at the time about the condition of the roads and the quality of existing maps in Ireland.  Dr. Richard Twiss published his Tour in Ireland in the same year, complaining of the condition of the roads and the lack of accuracy of the maps.  Arthur Young praised the roads and the maps.  The real state of Irish roads at the time would have been good for the main commercial and the leisure destinations.  Maps on the other hand, would have been county-based, as in Bernard Scale’s Hibernian Atlas, published in 1776, or route guides of varying accuracy.

Taylor and Skinner’s Maps of the Roads of Ireland was published in two editions, 1777 and 1782.  The 1782 edition contains one extra plate, revised lists of noblemen and gentlemen and some amendments to placenames.

This edition from 1777 contains a map of Ireland, followed by the title page.  A vignette from the Battle of the Boyne (1690) illustrates the title page.  The dedication to the Speaker of the House of Commons, the Right Honourable Edmond Sexten Pery, was an acknowledgement of financial support of Ł300 towards the survey.

The explanation lists the symbols used, the scale and the rates for tolls.  Conversion rates for Irish miles and currency is provided.  The difficulties of Irish placenames is offered as an apology for any inaccuracies.

The index lists the roads leading from Dublin and other locations with distances in Irish and British miles.  The main body of the book contains 288 pages of maps, beautifully engraved by G. (Garnet) Terry, who has signed every plate ‘Terry sculp’.  In this copy of the book, many of the plates are hand coloured.  The quality of the maps is excellent in terms of distance being correctly represented and much of the physical landscape correctly rendered.  The maps are less accurate in detailing areas which do not contain a gentleman’s seat and native Irish settlements are sometimes overlooked.

The final section lists the noblemen and gentlemen and their seats under Subscribers.  The list also notes with an asterix those who failed to support the survey.

Previous - Synge: The Aran Islands
Next - Trotter: Walks through Ireland