Luckombe: A Tour Through Ireland 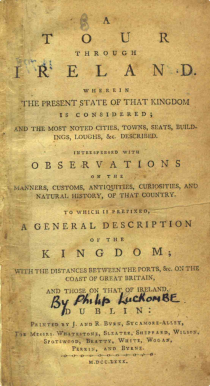 A Tour through Ireland

Title page of Luckombe's 'A Tour through Ireland'

A Tour through Ireland

Title page of Luckombe's 'A Tour through Ireland'

Philip Luckombe (1730-1803) was an English printer and author who was born in Exeter in 1730.  His first major work was a ‘Concise history of the origin and progress of printing’ which he published in two parts in 1771.

In writing his book on Ireland he seems to have borrowed heavily from a number of contemporary writers including Richard Twiss who had published his book ‘A tour in Ireland in 1775’ some four years earlier.

Eighteenth century tours in Ireland are relatively scarce and despite the fact that Luckombe may have plagiarised the works of others this book is a considerable rarity and interesting in its own right.

His tour in Ireland is arranged in four ‘journeys’: the first through the South East part of this Kingdom, the second through the ‘South, and South West Counties’, the third through the ‘South West, and part of the Western counties’ and the fourth journey is ‘From Dublin to the North-East, North and Western Part’.  The work is indexed.

Luckombe also wrote ‘The Traveller’s companion, or a new itinerary of England and Wales’ which was published in 1789.

Previous - Lewis: A Topographical Dictionary of Ireland
Next - Otway: A Tour in Connaught