Coyne & Bartlett: The Scenery and Antiquities of Ireland 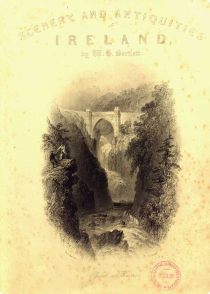 The most interesting and remarkable gems of Irish Scenery are said to be presented in these volumes. Using pen and pencil illustrations, the charms of ‘Green Isle of the West’ come to life. Although, the books are not only centered on lakes and mountains, they also celebrate the memorials of art, which are all around our country. Ruins of castles and forts, monuments of Pagan times and green mounds of fairy traditions are all included.

Illustrator W.H. Bartlett (1809 - 1854) penned his work from drawings made in front of the scenery depicted. Mr Bartlett has a high reputation from his scenery work in America, Switzerland, Scotland and the Bosphorous. He travelled throughout Britain, and in the mid and late 1840s he travelled extensively in the Middle East. He made four visits to the United States between 1835 and 1852. His drawings were taken from engravings and there are one hundred and twenty in these volumes.

N.P. Willis describes the scenery of the north of Ireland, part of Connemara, the river Shannon, Limerick and Waterford. J Stirling Coyne contributed to the whole volume stating the scenery of Cork and Kerry, the lakes of Killarney, Glengariff, Bantry Bay, the southern and western coasts including Galway Bay, Dublin and County Wicklow.

The authors make a point to avoid the topics of politics and religion, in order to give the reader a more enjoyable journey through Ireland’s scenery. The book opens with the tale of how they reached Ireland by boat and an image of Carrickfergus Castle – one of their first sights on the island.

Previous - Geography of Ireland
Next - Blacker: Brief Sketches Of The Parishes Of Booterstown And Donnybrook In The County Of Dublin