The Geography of Hurling 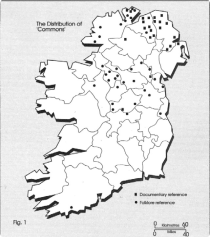 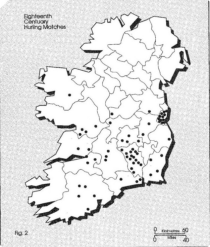 Why is hurling currently popular in a compact region centred on east Munster and south Leinster, and in isolated pockets in the Glens of Antrim and in the Ards peninsula of County Down? The answer lies in an exploration of the interplay between culture, politics and environment over a long period of time.


By the eighteenth century it is quite clear that there were two principal, and regionally distinct, versions of the game. One was akin to modern field hockey, or shinty, in that it did not allow handling of the ball; it was played with a narrow, crooked stick; it used a hard wooden ball (the 'crag'); it was mainly a winter game.


This game, called caman (anglicised to 'commons'), was confined to the northern half of the country; its southern limits were set sharply where the small farms of the drumlin belt petered out into the pastoral central lowlands.


The second version of the game (iomán or báire) was of southern provenance. The ball could be handled or carried on the hurl, which was flat and round-headed; the ball (the sliothar) was soft and made of animal hair; the game was played in summer.


Unlike commons, this form of hurling was patronised by the gentry, as a spectator and gambling sport, associated with fairs and other public gatherings, and involved a much greater degree of organisation (including advertising).