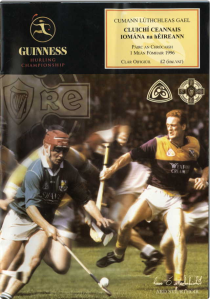 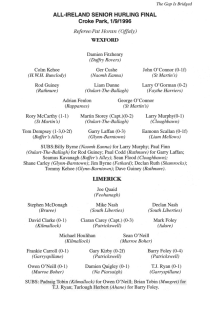 The roads through Enniscorthy, Gorey, Arklow and Bunclody were pregnant with the snake-like procession of Wexford registered cars and vans. The occupants were on their way to watch their heroes play in the All-Ireland hurling final.


The pensioners, with cherished memories of the golden era of the 1950s and 1960s, the middle-aged who still dreamed of their one great day in 1968, and those under 19, who never saw a Wexford team playing in an All-Ireland hurling final, made the pilgrimage.


Since 1968, dozens of defeats, many of them unlucky, and the consequent sad homeward journey along by the dark, age-old hills and upland meadows of the brooding Blackstairs, had failed to diminish the incurable optimism of the Wexford hurling followers. No other team in Ireland has such forgiving, such faithful, and such steadfast supporters as the hurlers of the Model County.


Disappointment, frustration and last minute defeat was their lot for 27 barren years. But the renewal of confidence took place annually. Like the crocuses of springtime they came out in April or May, bedecked in banners of purple and gold, only to fade like the last rose of summer before the end of July.

But 1996 was different. 1996 saw the emergence of a team of hurlers with new enthusiasm, with new attitudes and with those important elements that heretofore had been noticeably absent; discipline, passion, tactical awareness and togetherness.

A team that had been written off was in the All-Ireland final. A county where, according to the hurling experts, the standard of the game was on an accelerating downward spiral, had two adult teams in All-Ireland finals.


Players, whom the experts said were too set in their ways and too old to change their style, had confounded their critics and dramatically altered their game. The team had played four hard championship games and reeled off four impressive and, with the exception of Dublin, unexpected victories.

Extract from Tom Williams' With Heart and Hand.