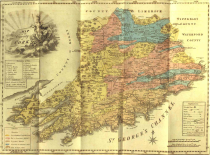 Map of Cork, taken from Townsend's Statistical Survey of the County of Cork, 1810.

Map of Cork, taken from Townsend's Statistical Survey of the County of Cork, 1810.

Rev. Townsends' Statistical Survey of the County Cork was undertaken on behalf of the Dublin Society and first published in 1810. It is a survey of in particular the agricultural economy of County Cork, the largest in the island of Ireland, and makes suggestions for its future improvement.

In the first section Townsend describes the topography of Cork and its climate, minerals, soil and waterways. The second section describes the agricultural activities in the county in particular grain production, vegetable growing and animal husbandry. The third section covers the cattle industry, dairying, grass, hay making and the prices of hides, wools and other goods. The fourth section describes the size and types of farms, the relationship between tenants and landlords, assizes, types of leases and the running of estates of landlords. A general inquiry section covers a wide range of subjects such as river navigation, towns and villages, the speaking of Irish and English, education, the diet, clothing and living conditions of the people and much more.

In the early 19th century County Cork was dominated by Anglo-Irish Protestant landowning dynasties while the majority of the Gaelic Irish population lived in poverty working as labourers on vast estates but surviving largely on a diet of potatoes. The majority still spoke Gaelic rather than English. The population of Ireland was increasing while small holdings were subdivided generation upon generation with potatoes becoming the stable diet of the poor. During the Napoleonic Wars which were ongoing at the time of Townsend's survey, Ireland 's agricultural economy boomed but would suffer a dramatic crash from 1815 onwards. Parallel with these changes the gradual removal of the Penal Laws from the late 18th century culminating in Catholic Emancipation in 1829 allowed a new class of Irish Catholic farmers to prosper in County Cork .

In the 1840s the Great Potato Famine decimated the class of landless labourers and created a tide of mass emigration that would continue into the 20th century. Between 1841 and 1851 alone the population of Cork dropped by 24% and Irish language went into a dramatic decline. The latter half of the 19th century also saw increasingly agrarian unrest nad political agitation in Co. Cork that came to a head in the passage of a series of land acts that broke up the landlord system. By the early 20th century the majority of former Irish Catholic tenants had bought their own land.

Townsend's survey like similar surveys of other Irish counties in the first decade of the 19th century on behalf of the Dublin Society, provides a snapshot of Irish society on the cusp of sweeping and revolutionary economic and social change.