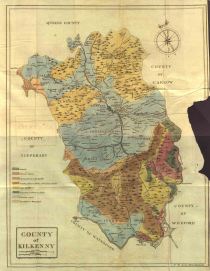 Statistical observations relative to the county of Kilkenny by William Tighe was published for the Dublin Society in 1802. The work is a detailed study of the geography, topography, economy and society of Kilkenny just after the turn of the 19th century. Among the subjects discussed are the mode of government, the climate, topography, soils, farm development, agricultural practises, crops, animals, living conditions, wages, money, manufacturing, religion and much more. Tighe also makes his recommendations for the improvement of the local economy and its society.

Unfortunately during the 19th century Ireland was to remain an almost feudal agricultural society while England, Scotland and Wales became the industrial centers of the world. While the cities of Britain expanded in size and population at an unprecedented rate and living standards rose, the Irish population became poorer and more dependent on the potato crop.

At the time the majority of land in Kilkenny like the rest of the country was in the hands of an enormously wealthy Anglo-Irish Protestant elite. The majority of the population were illiterate Catholic Gaelic Irish tenant farmers and peasants who lived in wretched conditions surviving on a basic diet of potatoes. The tenants and peasants paid high rents, tithes to the established Anglican Church and were discriminated against politically, socially and economically though the worst excesses of the Penal Laws were gradually being relaxed. Ireland suffered repeated crop failures and famines throughout the previous 18th century and the survey reveals many of the factors which would contribute to the Great Irish Famine which was to ravage Kilkenny in the 1840s.

At the same time as Tighe wrote his survey, people such as Edmund Ignatius Rice, a native of Kilkenny and founder of the Christian Brothers, did much to improve education for poorer Catholic children in Kilkenny. He founded his first schools in the early 19th century. This was a courageous step at the time, as it was against the law. Nonetheless, Rice believed in the right to teach the Catholic faith in schools without persecution. The curriculums in school at this time was reading and spelling, writing, arithmetic and book-keeping. Girls were taught to read and write, along with practical skills, such as sewing and spinning.