After the Anglo-Norman Conquest, the lands of Aderrig and Cooldrinagh were granted to the lord of Leixlip, Sir Adam de Hereford. At the beginning of the sixteenth century the FitzGerald family were in possession of a messuage and nearly fifty acres of land at Aderrig. Also the Vicars Choral of St. Patrick's Cathedral owned about seventy acres of arable and pasture land, as well as a park called Roe's croft, a small wood, and a castle in the townlands of Aderrig and Marshallsrath. After the dissolution of the Cathedral the property of the Vicars Choral at Aderrig were leased by the Crown to Chief Justice Luttrell, and then were granted to Sir Nicholas White, of St. Catherine's, under whom they were held by John Dongan.

After the Restoration the Whites, who had been dispossessed under the Commonwealth, are recorded again as owners of the lands in Aderrig parish, together with Arthur, second Viscount Ranelagh, who seems to have succeeded to some Church property in the parish through his grandfather, Archbishop Jones. Robert Scarborough is recorded as the principal inhabitant in the townland of Aderrig.

The decline of Aderrig is said to have commenced from the time of the death of Sir Bryan O'Neill of Backweston House, in 1694. While there appears the footprint of some buildings near the old ruined church in the townland on Duncan's map of 1821 there is no resident named in Lewis' writings. The buildings are still visible on Griffith's Valuation Map 1852 and are recorded in Griffith's Cancellation Books as being occupied by Hugh Bellany. He may have been the father or brother of David Bellany, who was the occupant in 1857 and subsequently the occupant of Esker House (Villa) for many years afterwards. The farmhouse on this site is estimated to have been built in about the 1820s and together with its L-shaped farm buildings is regarded as a good example of a working rural farm complex. 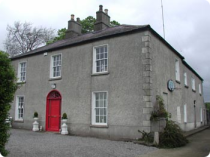 Prior to the sixteenth century the lands of Backweston belonged to the Priory of St. Wolstan. In the middle of the sixteenth century Backweston was in the possession of Sir John Allen, at one time Lord Chancellor of Ireland, who succeeded to the property of that Priory. At the time of the Commonwealth in the seventeenth century there was "a good fair house" with some cabins at Backweston. The house was then occupied by Thomas Sedgrave, a member of a Dublin mercantile family the Allens, who had been dispossessed under the Commonwealth, with the Restoration became again the owners of lands in Aderrig parish, which one can only presume included Backweston as before. By this stage, Backweston House had become the residence of Sir Bryan O'Neill, who was both a baronet and a knight. He was a descendant of the Chiefs of Claneboy, and a soldier on the royalist side in the Civil War in England. He was instrumental in preventing Charles I from being taken prisoner after the battle at Edgehill. After the restoration he was given a licence by the King to send wool to France. He died in about 1670 and was succeeded by his son of the same name.

Sir Bryan O'Neill, the second baronet, was educated as a lawyer and was appointed as a justice of the King's Bench in Ireland in 1687 by James II. As mentioned with Aderrig, the decline of the area which we presume to include Backweston seems to have commenced with the death of the second baronet and his line in 1694. Backweston house is thought to have been built in about 1800 and was occupied in 1851 by Patrick Peppard. There is a footprint for this farmhouse on Duncan's 1821 map and Griffith's 1852 Valuation map. 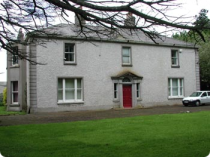 On Duncan's 1821 map a building footprint is labelled 'House' in the location of Westonpark House, situated in 'Back Westown Demesne'. The NIAH estimates that the present house was built about 1825. On Griffith's 1852 map the house is clearly labelled Westonpark House. The occupant at this time was Michael Doyle. It is currently occupied by Mr. Kennedy who established the aerodrome at Backweston. The aerodrome has been the location for many aviation films, including 'The Blue Max' in the 1970s.

Thought to have been built in about 1765, it was rebuilt in the twentieth century and is now in use as a hotel and restaurant. It is labelled on Griffith's 1852 map as 'Cooldrinagh Lodge' and was occupied at the time by Bartholomew Delaney. There are also former stable and domestic buildings dating from about 1850 associated with the house and demesne, which have been converted to a private dwelling. Cooldrinagh House was reputedly the childhood home of Samuel Beckett.