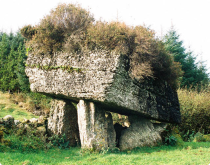 Wakeman does not label this illustration, so we do not know when he visited it, but as one can see there is little change to the monument.

The Labby Rock is massive megalithic tomb called a portal tomb. It was built during the Neolithic Period (c. 4,000-2,500 BC), a time when the agriculture was first practised. Portal tombs are often spectacular in appearance due to the impressively sized capstone, which covered a single burial chamber. Most have two tall upright stones (portals) set at the front of the monument so that the capstone rises at the front. Many portal tombs have traces of long cairns extending out behind them that may have come up to the base of the capstone, and these cairns may have been used to slide the capstone up onto the upright stones of the chamber.

The Labby consists of a well-preserved chamber with a large capstone, weighing around 70 tonnes, and measuring 4.4m long by 3.4m wide and 2m thick. It rests on four supports. The two portal stones at the front have a blocking stone behind them to seal the chamber. It has not been excavated in modern times, but Lady Louisa Tennison of Kilronan Castle may have removed cremated remains from it in the middle of the 19th century. It is called Labby after the Irish word leaba, meaning bed, and derives from the folk belief that this portal tomb was used as a sleeping place of Diarmaid and Gráinne when they were fleeing Fionn MacCumhaill. Diarmaid had a love spot on his forehead that women found irresistible and he eloped with Gráinne, who was Fionn Mac Cumhaill's bride to be and daughter of the High King of Ireland Cormac Mac Airt. The two lovers evaded Fionn's pursuit and finally made peace with him and settled at Granniamore near Ballymote.

Local folklore also says it is the burial place of Nuada of the Silver Arm, a king of the Tuatha de Danann, the ancient gods of Ireland. Balor of the Evil Eye, the leader of the demonic Fomorians, killed Nuada during the mythical Battle of Moytura, which tradition states was fought in this area.