Wakeman visited the Carrowmore complex on 7 August 1879 and made fourteen paintings depicting seventeen of the Carrowmore monuments. This one illustrates Carrowmore number 4. This comprises a boulder circle and central dolmen, which covers a polygonal chamber.

In Wakeman's drawing, as today, only one boulder remains, but the antiquarian, George Petrie, recorded twenty-one boulders in the circle and estimated that there were once forty when he visited in 1837. Its diameter is 12m. The central dolmen is 1.3m high and is made up of 5 gneiss orthostats and a split boulder as a roof stone, with is entrance being to the south southwest. The slab just outside the entrance may have been a blocking stone.

When the Sligo antiquarian Col. W. G. Wood-Martin excavated it around 1887 the chamber had been already disturbed. He found considerable quantities of burnt bone and unburnt animal bone including that of dog/wolf and pig, as well as rabbit, rodent and bird. Three bone pins, rolled quartz, a quartz flake and a shell were also found.

Carrowmore is the largest megalithic complex in Ireland and amongst the most important in Europe. The monuments form an oval shaped cluster around a centrally placed cairn covered monument, 'Listoghill' (Tomb 51). Carrowmore is made up of forty-two remaining monuments, but there were around eighty-four, many having being destroyed by quarrying. Out of the remaining forty-two there are twenty-five that definitely belong to the passage tomb tradition of megalith building. 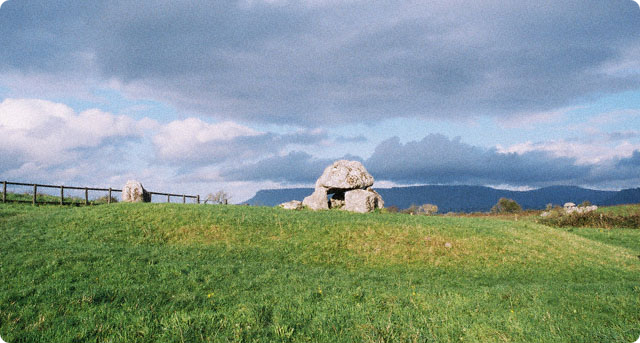 Passage tombs are probably the finest and most spectacular surviving examples of megaliths in Ireland, with those in the BoyneValley - Knowth, Dowth and Newgrange in Co. Meath, being the most celebrated and best known. However, considerable variation in both size and tomb plan occurs and this can be seen in examples of the simple passage tombs at Carrowmore. Many believe that this type of passage tomb belongs to the earliest part of the Neolithic, around 4000 BC.

Monuments like Maeve's cairn, a more complex type of passage tomb on Knocknarea Mountain, which overlooks the Carrowmore tombs date a thousand years later to around 3000BC. Some of the Carrowmore sites were re-used in later prehistory such as at tomb numbers 26 and 27.

Some passage tombs may be orientated at specific solar, lunar or celestial events, and some appear to be orientated at other monuments, conspicuous hilltops or landmarks. Various interpretations have been postulated but passage tombs could represent a wider communal form of ancestral worship than other megalith types.