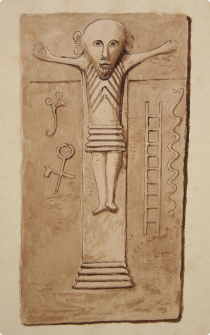 Wakeman made this drawing of the St Attracta in the townland of Clogher, near Monasteraden sometime in 1895. It is located at a point where a stream emerges from underground and is partially enclosed by a stone wall, part of which is of recent construction.

There is a crucifixion plaque, dating to the 1660s, in the wall on the north side of the well, which is flanked on each side by two large slabs.

The well is partly enclosed in dry stonewalling but incorporates bedrock. A bullaun stone projects from the wall, just above the water level. Bullauns are man-made hollows or basins, cut into rock outcrops, boulders or some portable stones. One, two or more holes may occur. They are mainly found in association with religious sites, but function is unknown. They could have been used as mortars to crush and grind foodstuffs and dyes, however, many are known for curing warts or other ailments. At St Attracta's Well the water from the bullaun was used to cure rickets in children (the softening and weakening of bone).

Several 'praying stones' or 'cursing stones' are cemented into the top of the wall above the crucifixion plaque. These are loose in Wakeman's drawing and number at thirteen. Eight water rolled stones and three angular stones are there today. Local tradition describes these as'cursing stones'.

There are a number of sites in Sligo with examples of stones, which are normally egg-shaped rounded stones, and are known as praying stones, holy stones or cursing stones. The most famous of these are the Clocha Breaca on Inishmurray Island. These are turned anti-clockwise nine times with certain prayers being said during a visit to the well.

Some stones at ecclesiastical sites are the same in appearance as cursing stones but when turned clockwise they become Holy Stones, Praying or Curing stones.

The patron saint of the well is St Attracta, who was converted by St Patrick and then founded a nunnery at Killaraght on the opposite side of Lough Gara south of this well. Her feast day was August 11th.