Wakeman painted this on 1 August 1879. As one can see from the photograph, little has changed since he painted it. It is situated near the top of the Easkey River valley, about 8.5km from the coast. It is today in rough bogland about 40m west of a small tributary of the EaskeyRiver. It is locally called the 'Giant's Griddle' or Fionn MacCool's Griddle. It is a fine example of a portal tomb. 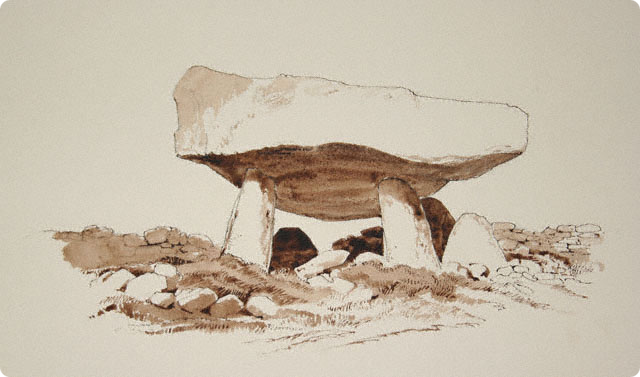 It was built during the Neolithic Period (c. 4,000-2,500 BC), a time when the agriculture was first practised. Portal tombs are often spectacular in appearance due to the impressively sized capstone, which covered a single burial chamber. Most have two tall upright stones (portals) set at the front of the monument so that the capstone rises at the front. Many portal tombs have traces of long cairns extending out behind them that may have come up to the base of the capstone, and these cairns may have been used to slide the capstone up onto the upright stones of the chamber.

Tawnatruffaun is located in a c. 30m long narrow cairn, just barely protruding from the peat. The front of the monument is at the southeast and is marked by two 1.7m tall portal stones set with their widest sides parallel to the axis of the chamber. There is a sill stone between these portals, blocking half the entrance. Three further stones make up the chamber, a stone on the east side, the back stone and the small stone leaning against the back stone on the west side, which is the side painted by Wakeman. The capstone or roofstone rests on the two portals and the highest point of the back stone. It is 3.15m long, 3.30m at the front, narrowing to 1.95m at the back and is 0.80m thick above the portals and 0.35m thick at the back stone. The chamber measures 2m long by 1.6m wide. 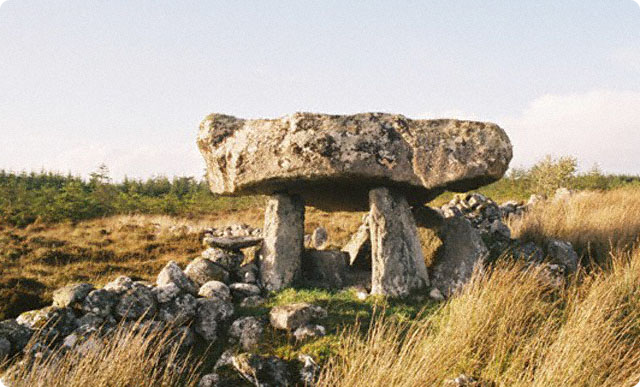 People in the past did not understand where impressive monuments such as this one came from. Folk traditions and superstitions were means of explaining their origins, and inevitably these superstitions helped preserve many of the monuments in the countryside today. As at Tawnatruffaun, some believed that they were built by giants or by Fionn MacCool and his band of warriors called the Fianna. Others believed they were the homes of fairies or other supernatural beings such as the ancient gods of Ireland, the Tuatha Dé Danannn. Each explanation throughout time is another layer of meaning that becomes attached to these very ancient monuments.