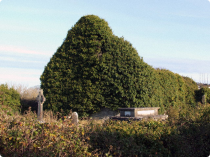 This is St Fechin's Church in Kilboglashy townland overlooking Ballysadare River to the east. It is within Kilboglashy graveyard and is a limestone built roofless ruined rectangular church measuring 19m east to west by 8m north to south.

Wakeman made a number of visits to the site for Colonel Cooper and did eleven drawings of views and features of this church between 1878 and 1880. This particular image of the church was painted from the southwest on 23 October 1878.

The pen and ink drawing of the Romanesque doorway inserted in the south wall of the church was made on 2 August 1879. One can clearly see that ivy and brambles have completely engulfed the church.

During a clean up of the graveyard a number architectural pieces as well as a Romanesque font, a stone head and medieval grave slab were found. A piece of window, possibly from Ballysadare Abbey 2350m west of here, was also found.

It is on the site of an early monastery founded by St Fechin of Fore in Co. Westmeath who died in 665 or 668 AD. St Fechin is supposed to be a descendant of Fionn Fuathart, brother of Conn of the Hundred Battles and was also related to St. Bridget. St Nathy of Achonry in Sligo is said to have educated Fechin, who was abbot the monastery at Cong, Co. Mayo, as well as that at Fore, Co. Westmeath. 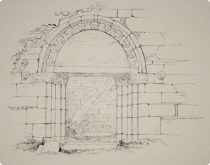 The present structure is 13th century in date and incorporates 12th century architectural features, including the doorway and the mouldings at the corners.

The church appears to have been repaired, altered or rebuilt at various periods in its history. Almost the entire south wall has been remodelled and 5.5m from the west gable a Romanesque door has been inserted.

The surround is made of weathered red sandstone. It has moulded corners and capitals decorated with animal motifs.

Springing from the outer capitals of the surround is a semicircular arch with eleven faces carved in high relief. Two other heads occur at either side of the doorway.

The space under the arch is filled with rough sandstone block. This space may have once held a decorative panel or tympanum. The heads may be representations of eleven of the twelve apostles with Judas excluded.

One can see that since Wakeman drew it in 1879 that considerable weathering and deterioration of detail has occurred .